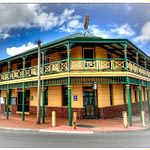 Located on the corner of Mine Rd and Bridge St, the Austral Hotel was completed early in 1894. The iconic Hotel was designed by Melbourne architect, John Waugh.

Originally named the Bridge Hotel, the name was changed within a month of opening to the “Austral Hotel”.

The building is two story, with the upstairs containing function rooms. Originally they were used for the local lodge meetings.